Dollops of Auspiciousness and Good health with Organic Cows Ghee

Opening a bottle of Organic India's Cow's pure ghee make my nostrils experience a familiar aroma. It is the aroma of Pure Ghee made from Cows milk. This aroma take me back in time to my childhood days when all the cooking in the household used to be supervised by my grandmother and only pure ghee made from the cow's milk was used in our household. Cows were an integral part of nearly every household and their milk was used to prepare the ghee.
My grandmother always used ghee for cooking food and sweets and it used to be  an intrinsic part of the puja ritual.
The word Ghee brings back memories of my grandmother (both maternal and Paternal) elaborating about the benefits of Pure Cow Ghee. In fact it is a tradition in many a households including mine to incorporate Pure and natural Cow Ghee in the diet. Cow's Ghee is considered to be so beneficial that it is used to give baby's a body massage as it helps strengthen the muscles and bones.
Pure Ghee made from cow's milk has been an important part of our lives.

Cow's Ghee is full of nutritive qualities. Its regular consumption enhances physical and mental strength. It keeps the body healthy and also helps in taking out the toxins from the body. It enhances eye sight, keeps muscles and tendons healthy. Cow's ghee is good for heart and optimizes the appetite. It is believed to increases intelligence and memory power. 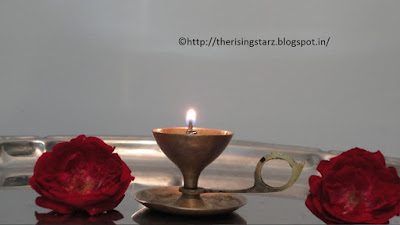 It Rejuvenates skin from inside as well as well from the outside. It detoxifies the body and boosts the body energy. With the use of cow's ghee the entire body gets rejuvenated and we become better equipped to face the stresses of modern day life and a fast paced and stressful routine. Ghee helps in equal distribution of fats in the body. It is also a trusted anti aging ingredient. No wonder why our dadi and nani (Grandmothers) always recommended cow's ghee.

Its festival time and we only use Cow's Ghee for Puja as lighting a cow's ghee lamp is believed to have the capacity to attract the satvik or positive vibrations. Thus a Ghee lamp is not only considered auspicious but is also a must for many a religious ceremonies.

It is a belief that an oil lamp can attract the sattvik vibrations spread over a limited distance where as the ghee lamp can attract sattvik vibrations spread upto the Swarga Loka (heaven) thus the use of Pure cow's ghee is a must in every Hawan (Homage to the gods)
When we use ghee lamp it helps to purify the atmosphere. If a lamp is lit with pure ghee made from cows milk, the vibrations are said to be in communion with Gods & deities.
'Lighting Pure cow ghee diyas or lamps' is considered as auspicious so people light up an earthen lamp Pure Ghee diya in their homes and temples as it is considered to attract the blessings of goddess Lakshmi the bestower of wealth. 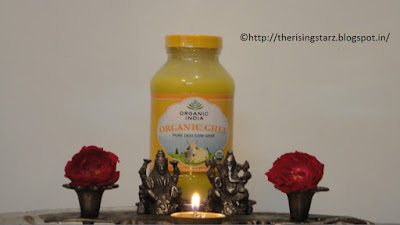 Organic India's Cow's pure ghee is made from the pure milk of mother cows. The cows whose milk is used are organically raised and they are not exposed to harmful chemical pesticides, artificial hormones or radiations which all may be found in non organic ghee.This cow's ghee is pure and organic as it is made from milk obtained from cows that are fed grass which is without any impurity.
Cows milk is considered to be sacred and its ghee is one of the purest form of milk which is extracted from its butter. Cow's milk has many medicinal qualities. Since ghee is the purest form of milk, it has it's highest qualities. 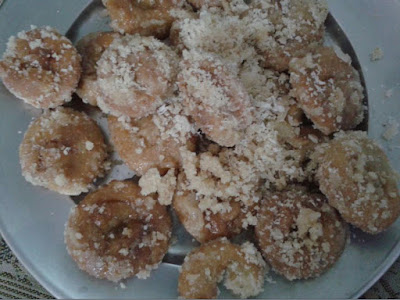 First sift the refined flour and soda bicarbonate together
into a bowl. Rub in two-thirds cup of organic ghee into
the flour mixture till it resembles breadcrumbs.
Then add the beaten yogurt and knead into a soft dough.
Cover and allow the dough to rest for forty-five minutes.

Divide the dough into twelve equal portions and shape into
smooth balls.Make a dent in the centre of each ball
with your thumb Cover the balls. Heat enough organic ghee in
a kadai and when it is medium hot,add the prepared
dough balls and deep fry on very low heat. Gradually the
balushahis will start floating to the top.
Turn them gently and fry on the other side also till
golden. The entire process may take nearly 30 minutes.
Drain and allow them to cool.
Heat together sugar and one cup of water till it reaches a
two-string consistency.
Remove from heat and soak the balushahis in it for half an
hour.
Carefully remove the juicy balushahis from the syrup and
keep on a plate.
Garnish with pistachios and serve when the sugar syrup gets
thoroughly dried forming a crust over the balushahi's.

Anyone can get  pure and healthy Organic cows ghee from here
http://organicindiashop.com/product/organic-foods/organic-ghee-500-ml-pack/167