Ab Montu Bolega ? But who is Montu? and what will he speak about? I believe that there is a Montu in every one of us. Montu is a voice in our Head that gives us a sense of doing right. Its also a thought in our heart that prompts us to stand against injustice.
Montu is M.O.N.T.U. i.e Minds Opinion Negating The Unsupportive oppression in peer groups,offices or any situation where there is more than one individual.
I See Montu as a free spirited child who is not afraid to speak out what is right. Our personalities as individuals are like layers of intertwined logic and emotions. At some level Montu is present in each one of us and tries to come out and speak up. It’s just fears of being rejected in a peer group , scolded or rebuked by a senior or someone in authority that one does not speak up or speak up powerfully enough. However these unspoken words do not die out but remain in our hearts and minds like that irritant in our throat that prevents us from speaking up freely.This irritant needs to be taken care off by being enabling us to voice our opinion and this voice must be acted upon.

Talking on the phone while driving, Talking on phone or loudly in a theatre during a movie.


Spitting just about anywhere on the road. There are so many people who irk us by doing things that are not right . What are the options for us to respond in such situations?  Be a Bollywood hero or better still a Rajnikant inspired clone who comes and knocks the living daylights out of every eve teaser in every bus, or Makes any one spitting or littering the roads sweep ,clean and repaint the walls. This solution may work in a Bollywood plot however we need more realistic solutions in real life. We need our voices of concerns heard. Strepsils the company that has been making the lozenges that helps us fight and remove that irritation in our throats when we are unable to speak has come up with #AbMontuBolega campaign. In this campaign anyone can visit the site http://www.abmontubolega.com/ and speak their mind about issues that matter to us and are often supressed or ridiculed in friend groups or made fun off. One can use this site to make our voices heard by people in authority and civic bodies .The biggest power is the power of people that mobilizes the nation . So by posting the expressions of our inner voices on this site we are giving the Montu inside us the opportunity to speak up and express the thoughts. The thoughts can also be share on their Facebook https://www.facebook.com/StrepsilsIndia and Twitter  https://twitter.com/StrepsilsIndia

India is a very big country with a huge population. Here people have a lot of aspirations of getting rich and earning big money. However the population is much more as compared to the opportunities. But ones luck is not a function of any external factor. We do not know when lady luck may smile upon us. People standing in long queues outside lottery shops is not uncommon, others try their luck at casinos or in a  game of chance. What’s common to all this activity? It is that one has to spend money in order to win something. All this is about to change with the advent of Lucky 6 a game brought to us by http://fatcatgaming.com

This game is a result of fat cat's  crowdsourcing funded project. In a country like ours where almost everyone has a mobile phone this app based game comes as an answer to a lot of game playing population.
Why one should play this game? The quick answer is to win. Win prizes like cash and holidays.
Winning gives immense gratification to players. However most free games reward players with badges,points or other small value prizes .Lucky 6 is the game of choice as it offers low stakes in terms that it is a free game and loads of prizes (Ready cash and Holidays)
It is a very easy to play the game. All that one needs to do is use the mobile phone  get the app from the company website http://fatcatgaming.com/

This is an app based game.
The interface is intuitive and easy to understand. For first use you would need an email to register. Choose a nickname by which you want to get famous (When you win cash and holidays you are bound to get famous )
Choose a pass code. Upon completing the signup process check your email and confirm your user information by clicking on the link and you are all set to play the game.
Use your email and passcode to login to the app.
The Gameplay is simple upon logging in click upon the Lucky 6 icon
The screen will show a list of brands. Your job as a player is to pick a set of six brands that you think will gain maximum on the game day. That is it, you are all set to play.
Now wait for the game day. If the stocks of the brands that you have chosen rises maximum on the game day then you would be declared as the winner.


The game is as simple as picking up a lottery ticket but more interactive and interesting as in the process of brand selection the players involvement increases .This is a big plus for any game.
Steps to play the game
Step 1: Download the app on your mobile device from http://fatcatgaming.com/ 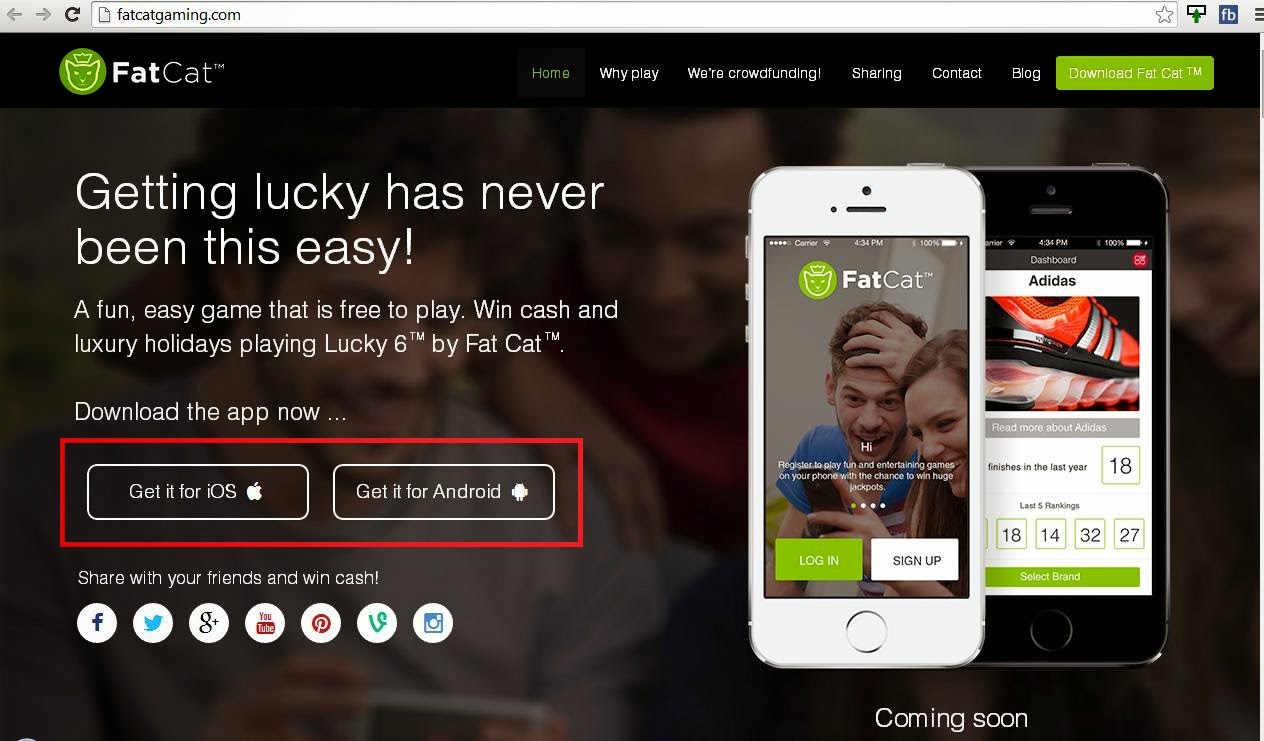 Registering requires entering Email,Selecting a nickname and a five digit passcode. The user can also enter information of the person who referred him or her.

Step 3 Confirm your information: Check your inbox for an email from http://fatcatgaming.com/
The user needs to click on the link to confirm his/her details. Now the user is ready to play the game 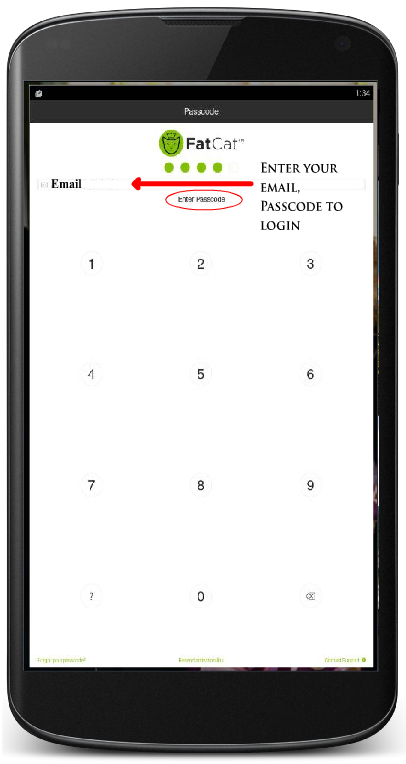 The user can take the tour to see how to play the game. 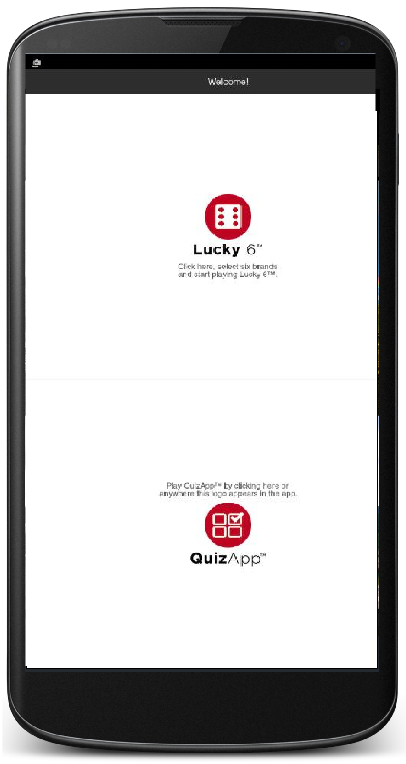 Step 5:Lets Play the Game: Click on the lucky 6 icon. It will take you to a list showing a number of brands
You need to pick any six of the brands . Then on the day of the game play if the stocks of your selected brands witnesses the highest gain then you win.

It is a game which would keep you involved and want to play more and more.
All images are taken from http://fatcatgaming.com and snapshots are created using fatcat.apk app
Posted by Hemaaa at 01:10 1 comment:

bring back the touch

Radha had a classic beauty and all the boys in her college were buzzing around her like honey bees around a flower.Radha had no time for them and did not even give them a second look.Her heart was somewhere else as it was captured by a shy guy by the name of Vipin.He was all the time engrossed in his books and was unaware that Radha had a soft corner for him.Then one day they chanced to meet in the library and as he picked up her books he chanced to touch her hand.He looked up and was mesmerized by her beauty and soft touch.Radha smiled at him and then started a love affair that was going to be the talk of the college for many years.
They graduated from the college and Vipin went abroad for his higher studies.Their only contact was the occasional telephone call which slowly reduced in frequency.
Here Radha was living a complacent life when one day she lost her parents in a tragic accident.She was devastated by the loss and soon the task of looking after her younger siblings,a brother and a sister fell on her.She had to look out for a job and soon the daily grind started to tell on her physical appearance.She was now losing interest in getting married as her heart was still with Vipin and she was afraid that he had lost interest in her. Moreover she had to take care of her brother and sister.One day she got a telephone call from Vipin telling her that he had come back for good and wanted to meet her.
Her joy knew no bounds but the next moment she felt sad .She knew that she was not a free bird anymore,she had to look after her siblings.Radha wanted to meet Vipin once again.She went and stood before the mirror,she saw a Radha who had become a shadow of her previous self.She could not meet Vipin looking like this.Everything was still not lost ,she had a weeks time before her meeting with Vipin.She opened her cosmetic box and took out the bottle of Parachute advansed body lotion.After four days she could see a visible change and on the seventh day her skin was soft and well nourished.
It was the old Radha again and as she stepped out to meet Vipin there was a smile on her lips.Vipin touched her hands and said that she had not changed at all,in fact she was looking even more beautiful than before.

We owe every Babli a toilet #ToiletForBabli


We are one of the nations with the highest population. What is even more alarming is that out of this population 597 million people are still defecating in the open.
We are not living in dark ages ,we are in the 21st century and as a nation that is at forefront of technology one that takes pride in having carved a niche in the IT world and having sent an unmanned mission to the planet Mars. We are still struggling in providng one of the most basic amenities to our people specially the women the facility that I am talking about is a clean hygienic toilet.
We all need clean toilets however an eye opening reality is that public toilets are hardly seen. They are wide and few and mostly dirty, unkempt and breeding ground of diseases .The situation is even worse in the rural areas . There people mostly use the open fields to answer the call of nature. This puts them in general and the women folk in particular at a great risk . They are exposed to hostile climate, hostile people and can only go out after dark or early mornings for lack of privacy.
The fecal matter is mostly left open in the fields. It rots ,stinks and becomes the feeding ground of disease causing organisms. Quite often it finds its way into drinking wells ,ponds,water streams and causes water borne diseases. This is another reason that cases of  diarrhoea are very common in rural areas. The flies sit on this fecal matter and carry the germs to open food articles . Thus infecting the people with various diseases. Who gets affected the most its often the female of the family “The Babli” who is always having loads of responsibilities and restrictions thrust upon her. She has little access to clean toilets ,and consequently more exposed to disease causing organisms . The lack of medical facilities only compounds the problem. Open defecation ,the fecal matter not being disposed off and becoming the breeding ground of disease causing organisms and pathogens and then its finding its way back into food articles by way of contamination forms a vicious circle. To break this chain of events, providing clean toilets and the education about hygiene are important steps that need to be taken. Domex, a HUL company has taken this initiative. They have started the #ToiletForBabli and they are going to build 20000 toilets by 2015.
We can all contribute to this cause by visiting http://www.domex.in/
Just “click” on the “Contribute Tab” on www.domex.in and Domex will contribute Rs.5 on your behalf to eradicate open defecation, thereby helping kids like Babli live a dignified life.
Posted by Hemaaa at 00:02 2 comments: