Marathi community used to organize a pandal in a nearby temple and there were programs related to music and dance but this year there are no such functions.


Many are not aware but elders say that on the day of Ganesh Chaturthi, one should not see the moon or else face false allegations in the coming year. To avoid this mithya Dosha,a curse that could falsely implicate a person of stealing something one must avoid seeing the moon on that night.


There is a interesting story behind it.Lord Ganesha was returning home on his mooshak or a mouse on a moonlit night on Chaturthi in the Bhadrapada month, the Moon God made fun of the Lord's round belly and his vahana. Lord Ganesha cursed him by saying that his light would never fall on earth.

According to a Legend, Shri Krishna too suffered from the effects of Mithya Dosha after he saw the moon on Chaturthi. He was accused of stealing precious gem Syamantaka. Sage Narada, who knew about Lord Ganesha's curse asked Shri Krishna to observe a fast to come out unaffected.


It is also said that if one sees the moon by mistake then those who read the story of syamantakamani will be freed from the curse of lord Ganesha.

Syamantakamani was gifted to an ardent devotee of lord Sun whose name is Satrajitu. The lord Sun was pleased by the penance performed by Satrajitu. Afterwards his brother Prasena takes the jewel when he had gone for hunting. Later that jewel goes into the hands of a lion which was killed by Jambavanta who was a great devotee of Lord Rama.

On the other side lord ShriKrishna is blamed for the lost precious jewel syamantakamani. Therefore he comes searching for it. He finds that jewel in the hands of Jambavanta. A great battle takes place between lord ShriKrishna and Jambavanta. Then Jambavanta realizes that lord Krishna is the incarnation of lord Rama and after which he gets his beautiful daughter Jambavati married off with lord Shri Krishna. Meanwhile he gives the jewel syamantakamani to lord Krishna. 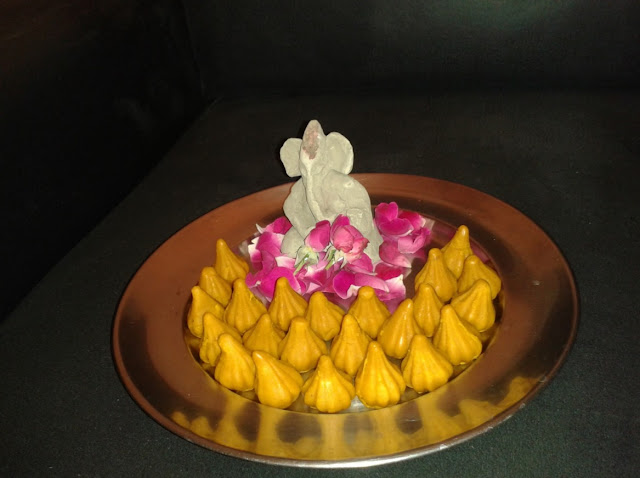 This Ganesha Idol was hand made by my brother who learnt pottery in school days.We also offered flowers,modaks and besan ladoo's to our Lord Ganpathi.

I pray to God Ganesha to shower wisdom, prosperity and good fortune.Remove our obstacles and bless us till eternity.