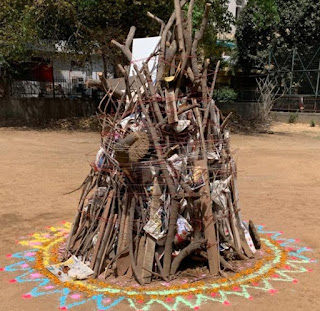 Like last year this year also there are restrictions on the Holi celebrations due to covid.

Holika Dahan is performed to mark victory of good over evil.


It is beleived that King Hiranyakashyap asked his sister Holika for help, who had a special garment that prevented her from being harmed by fire. She sat on a bonfire with Prahlad, as the fire ignited, the garment flew from Holika and covered Prahlad. Holika was burnt to death, Prahlad came out unharmed.

Vishnu appeared in the form of Narasimha - half human and half lion, at dusk (when it was neither day nor night), took Hiranyakashyap at a doorstep (which was neither indoors nor outdoors), placed him on his lap (which was neither land, water nor air), and then killed the king with his lion claws (which were neither a handheld weapon nor a launched weapon).

Lets pray together that all our evils, ego and bad habits and negativity burn in this holy fire forever. We and our loved ones live a happy and prosperous life.